Great Himalayan National Park, Kullu – A UNESCO World Heritage Site
High ridges, valleys with slow-moving glaciers, deep gorges, green meadows and closed virgin forests make the Great Himalayan National Park (GHNP) one of the most scenic destinations for nature lovers. The vast 1,171 sq. km wilderness hovering between the altitude of 1500 and 6000 m, harbours an abundance of wildlife which includes the Himalayan Thar, Himalayan Brown Bear, Snow Leopard, Blue Sheep, Western Tragopan and Monal in a landscape filled with fervent water streams and alpine slopes, lulled by stoic snow towers, to make it one of the wildest and most unique ecosystems in the world.
Countless trekkers, wildlife enthusiasts and birders who wander in its wilderness without a single paved road or trail, the area in its remoteness conserves the diverse flora and fauna of the region which got global recognition in June 2014 after being declared a Natural World Heritage Site by UNESCO.
In 2010, an area of 710 sq. km of the Parvati River catchment, contiguous to the northern boundary of Great Himalayan National Park, was notified as Khirganga National Park ‒ adding significant biological diversity, conservation value and physical protection to the park. 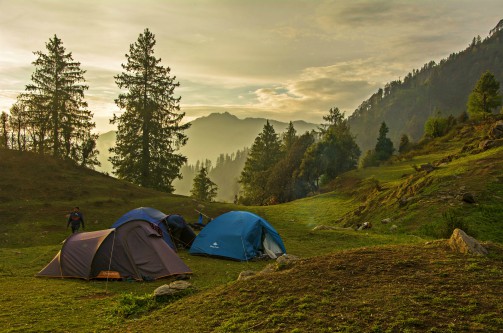 Flora and Fauna
Located in the sensitive ‘Western Himalayan Temperate Forests,’ GHNP is a global biodiversity hotspot that conserves over 832 species of plants, 192 species of lichens, 12 species of liverworts, 25 species of mosses, plus more than 31 mammal species, 209 birds, 9 amphibians, 12 reptiles and 125 insects.

Treks and Trails
Vivid terrains and contrasting landscapes of GHNP have many treks and trails worth embarking on.

Treks into the park

Best time to visit
April – June and September – November
The weather and visibility during these months is good. Visiting during the rainy season (July to August) and winter (December to March) is not recommended as the trails get buried under excessive weeds and bridges suffer damage during the rainy season, while in winters, snow restricts access to most areas of the park.

Entrance
Permits for entering the park are issued by Director, GHNP at Kullu and also by Range Officers stationed at Sairopa (Banjar), Largi and Sainj. Visitors have to pay an entrance and camera fee.

How to reach
Air: The nearest airport is at Bhuntar, 20 km away from Aut, the gateway town to Parvati valley and the Great Himalayan National Park.
Rail: The nearest narrow gauge railhead is at Jogindernagar, nearly 100 km from the park.
Road: GHNP can be reached from Aut, 30 km from Kullu. A branching road from the Manali highway at Aut, a little ahead of Mandi, leads to the park. From Aut, Largi is 4 km. Two routes from Largi, one along the Sainj Nala (motorable up to Neuli – 26 km) and the other along Tirthan Nala (motorable up to Gushani – 28 km) gets to the park entrance. The park is only accessible by foot as no mule or horse transport is allowed. 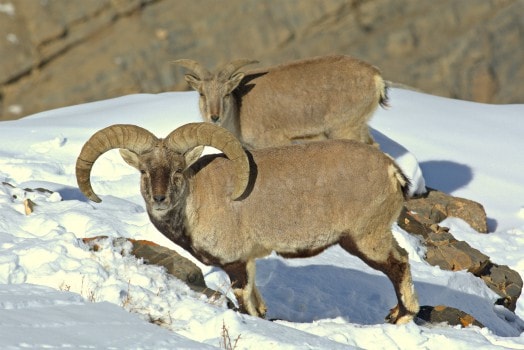 Tucked away in a Himalayan enclave, Pin is a beautiful tributary valley of Spiti. For its sheer richness of some rare flora and fauna this cold desert zone was declared as a National Park in 1987. Breaking out from the heights of Pin-Parvati Pass, the river races down to meet Spiti River near Dhankar.The park is sheltered by a buffer zone and is flanked by the Great Himalayan National Park (GHNP) on one side and the Rupi Bhaba sanctuary on another side. With a magnificent backdrop of awe-inspiring snow capped mountain ranges, the valley is above the treeline zone.

Flora and Fauna
On both sides of the valley, spread over 675 square kilometers are alpine pasture lands with a dry alpine and scrub type of vegetation that supports some rare and highly endangered species of wild animals. Juniper, birch and poplar groves grow on some fertile patches of the valley.

Pin is a refuge for the shy and endangered Snow Leopard. A fairly good population of this furry big cat with a long bushy tail has been recorded in the valley. Large populations of Ibex and blue sheep, often spotted grazing on highland pastures, are the natural prey of the snow leopard.
Pin also harbors several other big and small animals. Other animals found are the Tibetan Wolf Red Fox, Himalayan Brown Fox, Himalayan Marmots, Snow Hare and Mouse Hare. Birds spotted in the park include the Chukor, Yellow billed, Kestrels, Snow Partridge, Red Billed Choughs, Himalayan Snow Cock and the Tibet Snow Finch. Bearded Vultures, Ravens and Golden Eagle can be seen scouring the skies.

Trekking
Pin Valley National Park is an ideal camping and trekking country where one would rarely come across good and fortified accommodation. Setting up camps, taking shelter at local villages or at the monasteries is the best way to live out in Pin valley. A trek to this fascinating valley should however be attempted only by fit, adventurous and the spirited.

Restrictions: Inner line permits (ILP) are needed for anyone traveling within 40 km of the Indo-Tibet border. The permit is required only if one is traveling between Reckong Peo and Tabo, from the Shimla to Spiti route. However, no pass is needed if traveling from Manali to Spiti. The permit can be obtained from the District Magistrate office at Reckong Peo. 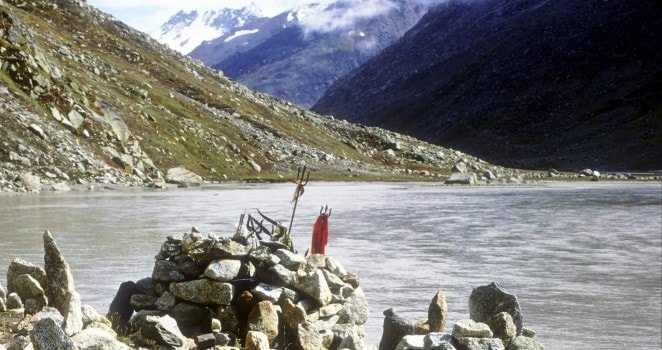 Tip: Do not attempt trekking in these areas unless you are physically fit, as you may feel breathless at high altitudes.

Best time to visit
The valley experiences a dry freezing weather combined with high velocity winds in winters when temperatures do drop to below -35°Celsius. It is difficult to access the park between December to March.
Summer is an ideal time to be in the reserve. You can plan your trip anytime between May to November, but the best time is between June to October when the temperature is warmer.

How to reach
Pin valley can be reached from Manali and from state capital Shimla.
Air: From Manali side the nearest airport is at Bhuntar in Kullu and the Shimla airport is the closest one from the more popular route to Spiti valley.
Rail: Shimla and Jogindernagar are the nearest narrow gauge railheads.
Road: There two routes to reach Pin Valley National Park are:
Route 1: The first route open from June to October is via Kullu – Manali – Rohtang Pass – Kunzum La to Kaza and Pin valley.
Route 2: The second route, open from April to November, is from Shimla – Tapri – Nako – Tabo to Kaza or Pin valley.

Treks and trails
Rocky terrains and expansive landscapes of Pin Valley National Park have many treks and trails worth embarking on.

Simbalbara National Park
At the confluence of Terai plains with the main Shivalik mountain system, the Simbalbara Wildlife Park is a biologically significant reserve where the flora and fauna of western Himalayas, Punjab plains and that of upper Gangetic plains do overlap. With an altitudinal range of 350 to 700 meters, the wilderness is covered with seven types of vegetation, mainly made up of northern dry mixed deciduous forests with plantations of Pine, Eucalyptus, Khair, Sal and riverine forests. The wildlife sanctuary was elevated to a National Park in the year 2010.

Just off the Nahan – Paonta highway and spread over 22.88 sq km area, the Simbalbara National Park in Paonta valley of Sirmaur is managed and preserved in its natural form. The park, largely hilly is constituted of sandstone and conglomerate prone to erosion, but some low lying areas are muddy with moist patches.

Animals sheltered in the park include the Leopard, Sambhar, Ghoral. Barking Deer, Jackal, Spotted Deer, Wild Boar and Blue Bull. Birds spotted in the habitat include the Hornbill, Peafowl, Red Jungle Fowl and Khaleej Pheasant. The park also has a healthy population of amphibians, reptiles and insects.

Thick Sal forests with grassy glades divided by small water streams offer several trails through the vistas, that one can embark on for a closer look of the wild. For the comfort and convenience of wildlife enthusiasts, the park has a rest house for observing the nature up close.

Best time to visit:
After the years rainy season, October to March are a good time to visit the park as much of the undergrowth is flattened out and sightings of shy animals is generally better.

How to reach
Air: Chandigarh is the nearest airport. It is 100 km from the park.
Rail: The nearest railhead is at Ambala Cantt. from where the park can be reached by road.
Road: Simbalbara is well connected by road and can easily be reached from Nahan, Dehradun, Chandigarh, Ambala and other cities.

him_admin2019-04-30T18:23:44+00:00
What's New Safety Guidelines for Tourists visiting Himachal Pradesh Shimla – Chandigarh – Shimla: Helitaxi Booking Do not stand at the edge of a cliff or on any bolder near a river bank for photographs etc. The water current in rivers of Himachal Pradesh is very strong and highly deceptive.