‘Shimla Nahin Basna, Kasauli Nahin Basna, Chamba Jana Zaroor’ – Settle not in Shimla, not in Kasauli, visit Chamba for sure – are the opening lyrics of a popular Himachali folk song sung by folk singers. Such is the charm of Chamba. Dotted with historical and architecturally significant landmarks, the town in its temples and palaces preserves much of its rich medieval past. For a traveller there is much to explore in and around Chamba.

Chamba, perhaps the loveliest valley of Himachal, is a treasure trove of scenic attractions, sparkling streams, primeval lakes, meadows, dense alpine tree covers, rich wildlife and fertile valleys. At the crossroads of Dhauladhar and Zanskar ranges, the region borders Jammu & Kashmir and is the northernmost district of the state. Fast flowing streams drain into River Ravi on the southern side and into River Chenab on the northern fringes.
The land is populated with a lively people who are endowed with a vibrant culture that stretches back thousands of years. Charm of the natives heartwarming hospitality is such that it has you longing for more. A splendid artistic heritage includes fine temple architecture, beautiful miniature paintings and the exquisite embroidered Chamba Rumal.
Nestling on the right bank of River Ravi, on terraced flats at a scenic place where the smaller Sal River meets the large one, the sprawling township of Chamba was founded by Raja Sahil Varman in 920 AD. It was at the insistence of his daughter Champavati that the king shifted his capital from Bharmaur to Chamba. After Chamba merged with the Indian union in 1947, the town now is a district headquarter.
Languages Spoken: English and Hindi are spoken by people engaged in tourism and professional trades.The locals mainly use Chambyali, a dialect.
Clothing Essentials: Summer temperature in Chamba can rise to around 35 degree Celsius and in winter they do hover near Zero degree Celsius. Light cotton clothes are best suited for summers, light woollens for spring and autumn but for winters, heavy woollen clothing is necessary. Those travelling into higher lands would require heavy woollens as morning-evening temperature can get very cold.

Air: The nearest airport to Chamba is the Pathankot Airport, at a distance of 120 km. The other closest airport is at Gaggal, Kangra, which is at a distance of 150 km from Chamba.
Rail: The Nearest railway station is Pathankot, about 120 km from Chamba.
Road: Chamba is well connected by road. Public and private bus operators run regular services to Shimla, Chandigarh, Delhi and other stations. Taxis are readily available.

Spend quality time at the Chaugan
The nerve centre of Chamba, Chaugan is a grassy open area, ideal for leisure, picnics and holding of sporting events. Being in the heart of the town, it serves as the cultural and entertainment centre for celebrations and festivals. The Chaugan plays host to the annual Minjar Mela. Traditional stalls displaying local handicrafts compete with showrooms in attracting buyers at festival fairs.

Visit the beautiful Chamunda Devi Temple
Overlooking the town, the stone and wood temple of Chamunda Devi is over 300 years old. Dedicated to Goddess Kali, this temple has some fine wood carvings that adorn its exterior and interiors. It can be reached by a stairway from the old bus stand as well as by a car from an alternate route.

Admire The Aesthetics of Laxmi Narayan Temple Complex
Built in stone and capped with a circular slate roofed chhatries supported on wooden beams, the Shikhara styled architecture of the Lakshmi Narayan temple complex, consisting of 6 temples is a landmark of the historical town. The main temple, dedicated to Lord Vishnu, was built by Raja Sahil Varman who founded the town. Interestingly three of these temples are dedicated to Lord Shiva and one to Radha Krishna. The chiselled cut stones walls are decorated with intricate designs on them and there are small arches supported by two chiselled pillars with sculpted deities enclosed.

Visit Bhuri Singh Museum
Raja Bhuri Singh, a former ruler of Chamba in his lifetime (1908 AD) did set up this museum that has a fine collection of rare paintings, coins, jewellery, musical instruments, artefacts, traditional arms & armours, and other artefacts on permanent display are the families personal collection of miniature paintings. There are also some rare copper-plate inscriptions and other historical documents preserved in this museum.

Saho Village
On the outskirts of Chamba, 18 kms away, on the bank of Sal River is Saho village. In the village there is a 1100 year old Chandrashekhar Temple houses a naturally formed Shiva Ligam, with a copper coating that was extracted from old copper mines of Chamba. It is believed that it was from Saho that the Lord Shiva made the journey to Manimahesh Kailash Peak in Bharmaur to settle there. In September an annual fair is held at the temple where the ‘Bhasmasur Dance’ is of special attraction.

Sarol: Landscaped gardens, a sheep breeding center and an apiary at Sarol make the place of interest for tourists. It is only 11 kms from Chamba.

Jhamwar: In the vicinity of thick alpine forestlands, the apple orchard country of Jhamwar has a special rural charm. It is only 10 kms from Chamba.

Katasan Devi Temple
Overlooking Chamba valley, this Devi temple is near the Baira Siul hydroelectric project. It is a pilgrim attraction and a picnic site. It is 30 km from Chamba.

Dining
Chamba has some well developed dining places that cater to Indian and continental appetites. Good eateries are scattered around the Chaugan, which includes the Chaugan Restaurant. With many tourists heading out for day excursions or on longer trips, many roadside Dhaba outlets and better equipped restaurants serving fresh to eat hot meals and snacks are available.

Hospitals
Good medical care facilities are available at Chamba and government run civil hospitals at Bharmaur and Dalhousie. They serve the healthcare needs of tourists. At Chamba, the government runs a good hospital that is attached to a medical college.
In the outer areas of the district, especially so in Churah and Pangi, the available health care facilities are basic and one may have to fall back to the better equipped institution at Chamba for medical emergency needs. In Chamba there are also some good private hospitals and clinic which do attend to the prompt medical needs.

Transport
Chamba is well connected by road. Private and public transport networks operate services to the major cities of Dharamshala, Shimla, Mandi, Kullu, Chandigarh, Delhi and to nearby stations of Bharmaur and Dalhousie. Luxury coaches, public carrier buses and taxis are readily available for all destinations.

Chamba for its moderate climate is a year around destination.

Minjar Fair
Minjar Fair, the main festival of Chamba, is held at the sprawling Chaugan ground in July/August. Celebrating nature’s bounty, the farming community prays for a good harvest by offering the first sprouting corn silk, locally called ‘Minjar’, to divine River Ravi for the occasion. The celebrations go on for a week. Stalls selling local crafts and produce are put up and for the evenings cultural performances that draw large crowds are held.

Sui Mela, Chamba
At the Sui Mata Temple, Chamba, a fair called ‘Sui Mela’ is held commemorating a queen who ended the towns water scarcity in 10th century. Annually held in second week of April month, this fair is attended by women and children who in their best attire sing praises of the Rani and offer homage to the Rani for her singular sacrifice.

Chattradi Jatar
At Chattradi in the confined Chamba countryside, the fair is held in September at the Shakti Devi temple. A major attraction at this festival is the masked dance performance that has the audience spellbound.

Manimahesh Yatra, Bharmaur
The simplicity, grandeur and intense belief system of Bharmaur valley can be witnessed during the holding of the Manimahesh Yatra in August/September. This festival is held after Janmashtami. The Yatra is an arduous and difficult trek to the scenic mountain lake (altitude 4190 meters) lying at the foot of the commanding Mount Kailash at Manimahesh. At Bharmaur, 35 km short of the lake, the nomadic Gaddi tribesman hold a fair that goes on for six days.

Chamera Lake
On the route from Chamba to Dalhousie, the lake of Chamera Dam backwaters have developed into a popular getaway. Water sport activities of boating, kayaking, canoeing, sailing and fishing are recreational and fun filled escapades. To end a day, one can sit back and enjoy the splendour of the sunset as the calm waters reflect back vivid colours. The dam built on River Ravi is 40 km from Chamba. 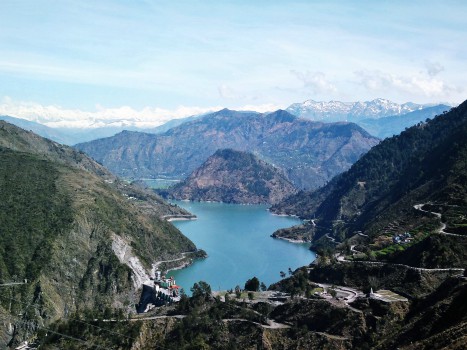 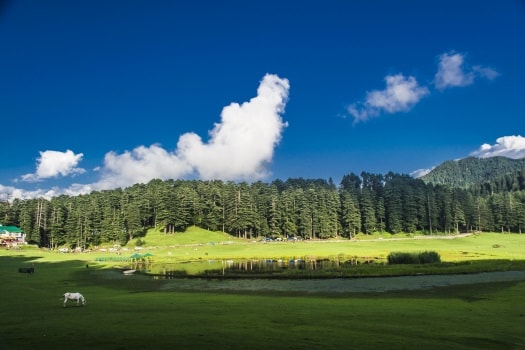 Khajjiar
Often compared with Swiss mountain meadows, Khajjiar is a wide grassy clearing around a pond with a thick cedar forest. On higher ground near the pond is the small temple of Khajji Nag that dates to the 12th century AD.
This scenic spot is 26 km from Chamba and 23 km from Dalhousie. More than a road journey, an easy trek to Khajjiar from Chamba brings you up close with nature to make it a memorable photogenic experience.

Bharmaur
Having been the seat of power for four centuries, Bharmaur was known for its grandiose and royal benevolence. Remains and monuments, best exemplified in the Chaurasi temple complex, exhibit the heritage of the historical township. Nestled on the bank of Budhal river, in a fertile valley between the Dhauladhar and Pir Panjal ranges with an abundant of easily accessible alpine pastures in the vicinity, the land is home to the noble nomadic Gaddi tribesman.
In the heart of Bharmaur town is the historic Chaurasi Temple complex, which dates back to the 7th century. Here stand 84 temples and shrines that are dedicated to 84 yogis (Siddhas). Entrance to the complex is decorated with an ornate structural pediment. The main temple is dedicated to Lord Shiva as Mani Mahesh. Another important temple at the complex is that of Lakshana Devi. Many other surrounding temples are in symbolic form as Shiva Lingas. There is a belief that a pilgrimage to Lake Manimahesh is incomplete without a visit to Chaurasi Temple. Bharmaur is 65 km from Chamba. 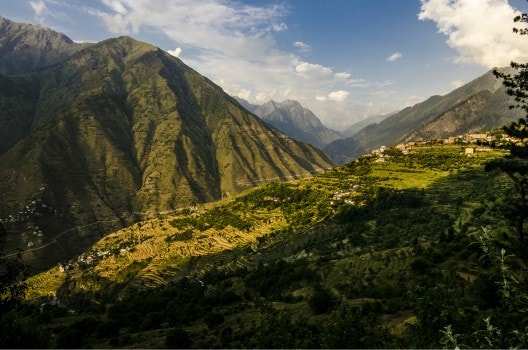 The Atal Bihari Vajpayee Institute of Mountaineering and Allied Sports, Manali runs a Mountaineering Center at Bharmaur. Training camps in rock climbing, mountaineering, skiing and other adventure sport disciplines are conducted by this centre. It also organizes treks and even provides basic equipment like tents, sleeping bags and other trekking gear. 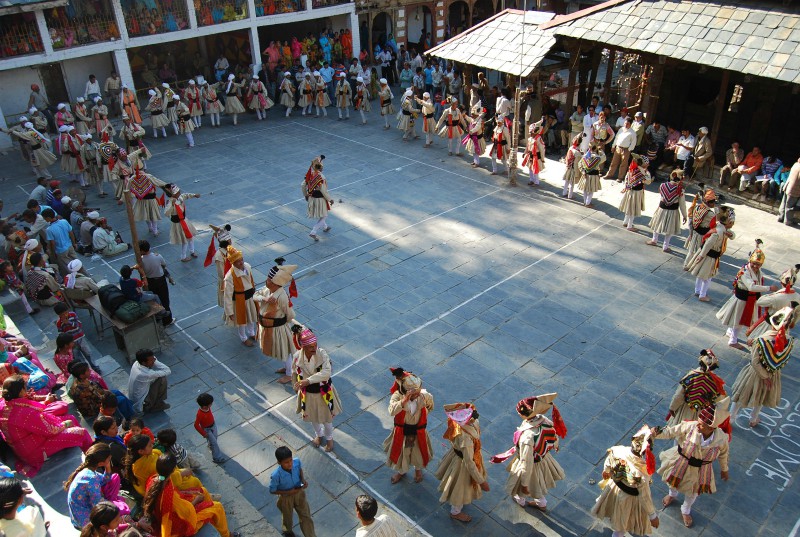 Shakti Devi temple at Chhatrari, is a well documented temple of Chamba – Bharmaur built in the traditional architectural style. The temple belongs to the period when the first temples of Chaurasi complex at Bharmaur were built. The wood work at this temple is very impressive. The brass idol of Shakti Devi is dated to the 8th century period. On the 3rd day of Manimahesh Yatra, water from Manimahesh lake is brought down to the temple and the idol of Maa Shakti is bathed with it. Chhatrari is 40 Km from Chamba.

Salooni
Spread out along a ridge between Pir Panjal and Dhauladhar ranges, Salooni, overlooking the Bhandal valley is where Bollywood directors come to shoot romantic sequences. The nearby Gamgul Siahehi Wildlife Sanctuary conserves rich Himalayan flora and fauna which includes musk deer, barking deer, monal pheasant and the snow leopard. Salooni is 56 kms from Chamba and the game reserve is 20 km from Salooni.

Bhandal
The Bhandal valley opens up at Salooni and after passing through Langhera goes on to Kishtwar in Jammu. The valley is rich in flora and fauna and is a popular trekking area. The 38 km journey from Chamba to Bhandal passes through some stunning landscape in Ravi River valley.

him_admin2021-10-26T14:38:38+00:00
What's New Safety Guidelines for Tourists visiting Himachal Pradesh Shimla – Chandigarh – Shimla: Helitaxi Booking Do not stand at the edge of a cliff or on any bolder near a river bank for photographs etc. The water current in rivers of Himachal Pradesh is very strong and highly deceptive.