Bilaspur was a orderly princely state known as Kahloor before it merged with the Indian union after the country attained independence. It became a part of Himachal Pradesh in 1954 and was made into a district. The princely state came into being in 7th century AD, with the ruling dynasty tracing their roots to Chanderwanshi Rajputs of Bundelkhand in Madhya Pradesh.
Kot Kahloor till 1650 AD remained the capital, when ruler Deep Chand decided to shift it to the left bank of River Satluj. What used to be the historic Old Bilaspur, capital of the princely state, got completely submerged with the completion of Bhakra Dam in 1963. The sprawling new Bilaspur town has come up on higher ground near the old capital.
Gobind Sagar is one of the largest manmade lakes of the country that has reshaped the identity of Bilaspur and turned into a attractive tourist destination. It has become a hub for water sports activities, boating and an excellent site for game fishing. Being a district headquarter, the town is well connected and can easily be reached from Hamirpur, Una, Shimla, Mandi, Kullu-Manali and Chandigarh. There are plenty of popular destinations and offbeat locations around to explore for a fun-filled visit.

Languages Spoken
English and Hindi are understood and used by people engaged in tourism and other professional trades. Locals speak Bilaspuri or Kahloori, dialects belonging to the Western Pahari group of languages.

Clothing Essentials
Bilaspur has moderate temperatures in spring and autumn but can get hot for May-June, the peak summer days. By evening the lake does fan cool breezes over the habitation. Light cotton clothing is most suited for these days but in winter, a dense fog cover that lingers well into the afternoon gets the place to experience some real cold days and nights. A need for heavy woollens is felt in winter.

Air: The closest airports for Bilaspur are at Chandigarh and Shimla.
Rail: The nearest railway station at Kiratpur is 65 kms away.
Road: Bilaspur can only be reached by road. It is 88 km from Shimla, 135 km from Chandigarh and 360 km from Delhi. It is well served by public and private transport services. Taxis are readily available for travelling in comfort.
Dining
There are many fine restaurants and clean dhabas that serve good Indian food. The Lake View Cafe near Bilaspur, overlooking the Gobind Sagar lake, is a good place to try out Indian cuisines.

Transport
State and privately owned buses are the primary mode of public transport to the district and from other nearby destinations. Taxis are readily available for travelling in comfort.

Hospitals
Bilaspur is equipped with good medical care facilities. There is a government run regional hospital and there are also decent private run hospitals that meet the needs of tourists passing through the city.

Internet connectivity in the town and the nearby destinations is good. All national mobile phone services providers have a presence in Bilaspur.
Markandeya Fair
In April for Baisakhi a fair at Rishi Markandeya temple complex, near Bilaspur, is a big draw that attracts a lot of pilgrims. The belief goes that Markandeya was doomed to die at the age of 12, in accordance to a prophecy at his birth. The boy prayed and won the grace of Lord Shiva who blessed him with a long life on Baisakhi. The boy became a sage and the fair is held in his honour. Devotees take a dip at a spring in the temple complex that is believed to have started following the day Markandeya was blessed with a long life. Stalls set up for the fair do sell local craft and handicraft products.
The temple is 20 km from Bilaspur.

Nalwari Cattle Fair
Rural way of life in Himachal holds many festivals that are connected with farm activities. Nalwari of Bilaspur as a cattle trade fair is one of them. It was W Goldstein as Shimla Superintendent in 1898, who impressed by native breeds of cattle got the fair started to spread them to other parts. Nalwari has kept the tradition alive ever since.
Not just trading of farm animals, the annual week long festival in March has become famous for holding rural games, particularly wrestling. The fair is a good opportunity to be among a rural people. The venue wears a decorative look, people are out in their best clothes, and the stalls that are set up sell local artefacts, handicrafts, jewellery, toys, and eatables. Wrestling bouts add to the days excitement. 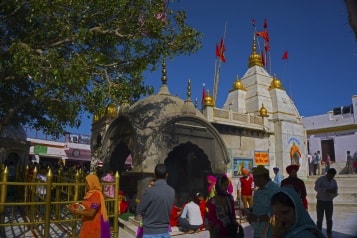 Shree Naina Devi
Perched on a hilltop on the borders with Punjab, Shree Naina Devi is an important Shaktipeeth pilgrimage center that lakhs of people visit every year.
Believers hold that as the dead body of Sati dismembered during an all consuming cosmic Tandav dance of Lord Shiva, it was the eyes that fell at Naina Devi, giving the place its name. It was Raja Bir Chand of Bilaspur who built the temple in the 8th century. Pilgrims throng the temple for the Navratri fairs in March/April, July/August and October with the latter one drawing larger crowds. The temple affords a commanding view of Bhakra Dam, Anandpur Sahib and Gobind Sagar Lake.

Gobind Sagar
Surrounded by low lying mountains, the Gobind Sagar Lake is one of the largest manmade lakes of India. The lake is spread in Bilaspur and Una districts and covers over 170 square kilometers of surface area.
The lake is named after Guru Gobind Singh, commemorating the 10th Sikh Guru stay in the hills during his long struggle against the Mughal empire. In winters, when the lake recedes, exposing the bed at many places, shikhara of half buried historic stone temples emerge as a reminder about the submerger of old Bilaspur in these waters.
With the past behind, the lake had developed facilities for water sport disciplines of swimming, kayaking, canoeing, water skiing and sailing. Water scooters and motor boat rides are also available on hire.
A variety of fish, which includes Mahaseer, Carp Catla, Mrigal and Rohu are found in the lake that make it a haven for recreational fishing. Fishing season is open in March-April and October-November. 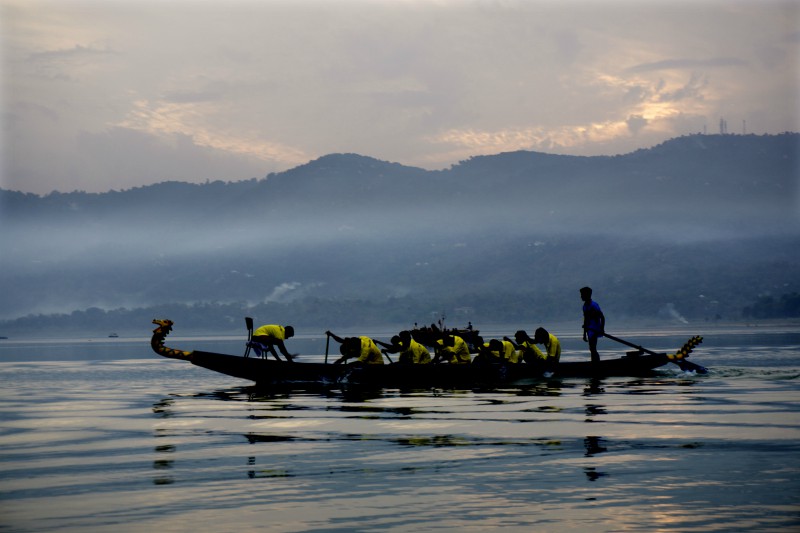 Kandrour Bridge
Kandrour Bridge in an engineering marvel on River Satluj that connects the banks over a 280 meter long span. Not the length so much as the height of 80 meters from the river surfaced posed a real challenge to the engineers who completed this bridge in 1965. Standing in the middle of the bridge, looking down at the dizzying height is worth trying out.

Bhakra Dam
For a newly independent democratic India Bhakra Dam was an ambitious project. Foundations of this huge structure was laid by Prime Minister Jawaharlal Nehru by pouring the first bucket of concrete on 17th November, 1955. The dam site at Bhakra village that holds back the massive lake spread over 170 square kilometers has become a tourist attraction. The 226 meter high, 518 meters long and 9 meters wide dam at the top was completed eight years later in 1963.
The dam management authorities have an office at Nangal town lying at the toe of the dam which provides information and guidance to tourists visiting the site.

him_admin2019-05-28T12:05:11+00:00
What's New Safety Guidelines for Tourists visiting Himachal Pradesh Shimla – Chandigarh – Shimla: Helitaxi Booking Do not stand at the edge of a cliff or on any bolder near a river bank for photographs etc. The water current in rivers of Himachal Pradesh is very strong and highly deceptive.