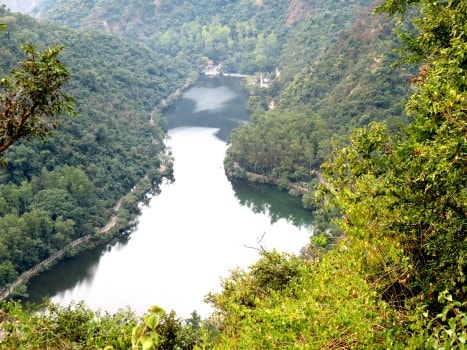 Renuka Wildlife Sanctuary
In the vicinity of Renuka Lake in Sirmaur, dense forests around the wetland, replete with freshwater springs is the Renuka wildlife sanctuary. Spread over an area of 402 hectares. It also has a buffer belt of another 300 hectares which is outside the core area.

The mixed deciduous forest sanctuary is dominated by Sal, Shisham, Khair and other trees and a variety of climbers in moist depressions. Rich in wildlife, the animals found in this sanctuary include the Leopard, Samber, Spotted Deer, Barking Deer, Jackal, Black Bear and Porcupine. The birds sighted include Red Jungle Fowl, Khaleej Pheasant, Blue Jay, Black Partridge, Drongos, Scarlet Minivet, Common Coots and others.

Besides the lake there is also a mini zoo where rescued, stray and deserted animals from the forests are given shelter. The sanctuary is about 40 km from Nahan, the district headquarter. Dadahu is the biggest settlement near the sanctuary which can be reached by taxi or by public transport.

The Churdhar Sanctuary
Spread over an area of 56.16 sq km along the flanks of Churdhar range in Sirmaur, the deeply forested area is composed of a western mixed coniferous forests type with large plantations of Kharu Oaks interspersed in between. Abundance of cedar, blue pine and spruce forests give the area a rich green cover.

Animals and birds found in this sanctuary are the Leopard, Himalayan Black Bear, Barking Deer, Ghoral, Musk Deer, Monal Pheasant, Khaleej Pheasant and the Red Jungle Fowl.
The sanctuary can be reached from Nohradhar in Sirmaur and from Chopal in Shimla hills. There are some fine trekking trails in this protected area. 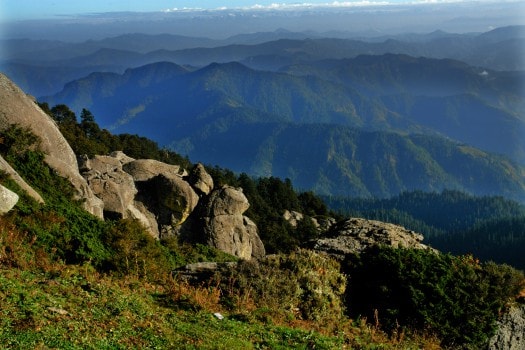 Kalatop- Khajjiar Sanctuary
Covered with a dense canopy of blue pine, deodar, oaks and flowering rhododendron trees, the Kalatop-Khajjiar Sanctuary of Chamba is spread over 17.17 sq km. The sanctuary is a rich habitat of western Himalayan flora and fauna. The animals and birds sighted in this reserve include the Leopard, Black Bear, Barking Deer, Goral, Serow and the Pheasant birds of Cheer and Khaleej. The area with a number of well laid out trekking trails both at Kalatop and Khajjiar offers a chance to witness the wildlife up close.

The sanctuary can be reached from both Chamba and Dalhousie. At a walking distance, it is only 10 km from Dalhousie.

Daranghati Sanctuary
Daranghati, once the game reserve of Bushehar rulers, is also popular for the legendary Old Hindustan-Tibet Road that traverses through its expanse. Spread across 171 sq. km, Daranghati Wildlife Sanctuary houses a plethora of forest denizens across a diversity of habitats that not many sanctuaries can boast off. The sanctuary is broadly divided into two parts, one approachable from Rampur and other from Sarahan.

Best way to visit the sanctuary is to travel till the old town of Rampur Bushehar. From here one can either explore the southern end of the sanctuary from Taklech. Alternatively, one can also take the road leading up to Mashnoo and explore the various trails the sanctuary has to offer over the high mountains that run along the Old-Hindustan Tibet Road. The sanctuary basically surrounds the remote region of Kashapat from three sides.

Daranghati houses a number of mammals and over 150 species of birds. Prominent among the mammals are Himalayan Brown Bear, Himalayan Black bear, Himalayan Musk Deer, Serow, Himalayan Weasel, and Blue Sheep. Among the birds, the pheasants, Koklass Pheasant, Cheer Pheasant and Kaleej Pheasant occur in good numbers. In fact the sanctuary is one of the few areas that form the habitat of Western Tragopan, locally known as Jujurana which is the state bird of Himachal Pradesh.

Kanwar Sanctuary
Parvati Valley in Kullu district is endowed with so much natural beauty topped with varied geographic divisions and climatic conditions that the Kanwar wildlife sanctuary is another natural jewel in its crown. Spread over an area of 107 sq km, the altitude in the sanctuary ranges from 1800 to over 4800 meters, making its diverse landscape a rich habitat for varied flora and fauna species.
The sanctuary be reached from Kasol or Manikaran, a place famous for its hot water springs.
Spread over a large area, there are forests of Oak, Deodar, mixed conifers, blue pine, spruce and fir in the higher ranges. As the treeline ends with birch and dwarfed juniper trees, alpine pastures take over. Lower down in the valley there are mixed forests of deciduous trees.

Kanwar sanctuary has a healthy population of the Himalayan Thar. Other animals found here include the Black Bear, Brown Bear, Musk Deer, Barking Deer, Goral, Ibex, Leopard, Snow Leopard and others. The birds sighted include the Khaleej, Monal, Cheer and Western Tragopan Pheasants.

Rupi Bhawa Sanctuary
In the shadow of Shrikhand mountains range is the Rupi- Bhawa Wildlife Sanctuary. The sanctuary is named after Rupi and Bhawa Valleys of Lower Kinnaur, on upper reaches of which most of the 503 sq. km area of sanctuary lies. The elevation ranges from 2000m-6000m, but the sanctuary is locally well known for its extensive alpine pastures as well as the numerous treks, trails and passes that connect it with the neighboring Great Himalayan National Park and Pin Valley National Park.

Rupi-Bhawa lies in Nichar subdivision of Kinnaur District. The nearest rail and air head is Shimla and nearest town is Bhawanagar. The sanctuary lies across the river Sutlej and is accessible from two points. One is via a link road near Chaura that winds down and goes across Sutlej near the Shorang Hydropower Project. From here a hike of about 3 hours takes one into the heart of Rupi Valley. The other contact point is at Wangtu, on the highway to Kinnaur. One needs to cross the Wangtu Bridge across Sutlej and travel upto Kafnu from where a light hike will take you into Bhawa Valley.

Rakchham Chitkul Sanctuary
Sangla Valley, often described as the most beautiful of the Himachal valleys, Rakchham and Chitkul are the two old villages in this picturesque part of Himalayas and after them is named the heavenly Rakchham-Chitkul Wildlife Sanctuary.

For visiting Sangla and the Rakchham Chitkul Wildlife Sanctuary, you need to take a detour from the National Highway in Kinnaur, at a place called Karchham. The route over the left bank of river Sutlej takes one along the river Baspa to the valley of Sangla. Sangla, Batseri, Rakchham, Chitkul are some of the villages in the valley. The sanctuary itself is located on upper reaches of the side-mountains. It is connected to Uttarakhand and adjacent region of Dodra Kwar via high passes, some of which are the most adventurous and beautiful treks in Himalayas.

Majathal Sanctuary
Spread over the hilly terrains of Solan and parts of Shimla districts, Majathal sanctuary is spread over 31 sq km. The altitude of the reserve varying between 900 to 2000 meters in the valley is considered to among the best habitats for the Cheer Pheasant.

The sanctuary can be easily reached from Shimla, Solan or Bilaspur. Kraraghat, on the Shimla – Bilaspur highway, makes for a good approach to this protected area for observing wildlife.

Consisting of typical low lying western Himalayan flora and fauna, the sanctuary is drier with many forests of Ban Oak and with sparse forests of pine. Wildlife sighted in the sanctuary includes the Leopard, Ghoral and Barking Deer. The birds spotted easily are Cheer Pheasant, Kaleej Pheasant, Red Jungle Fowl, Peafowl and Black Partridge.

Chail Wildlife Sanctuary
Known for its rich wildlife and vivid flora, Chail Sanctuary is famous for preserving the biodiversity of the region. The sanctuary is spread out in 16 sq km around Chail, the hill station. Thick deodar and oak forests with small grasslands are home to several animal and bird species like Sambhar, Goral and Cheer Pheasants. The Cheer Pheasant Breeding Centre, a part of the sanctuary, does let visitors take a closer look at the beautiful bird.

Barking Deer and Khaleej are sure to meet and greet, as you stroll into the woods at dawn or dusk. Other animals sighted in this sanctuary are Barking Deer, Hare, Wild Boar and the birds include Chukor, Peafowl, Red Jungle Fowl, Woodpecker and Black Partridge.

Manali Wildlife Sanctuary
Apart from backpackers and honeymooners, many who fall in love with Manali are wildlife enthusiast. On the outskirts of the popular resort township is the 29 sq km wildlife sanctuary that harbours rich flora and fauna. Jaws drop in awe as you take a bridle path passing through dense deodar and maple forests from Hadimba temple to venture deep into the woods.

Should you be lucky enough, you may sight the rare Musk Deer peeking from behind a tree trunk while a Monal swoops in on thorny bushes to put up a colourful display in monotones of woods.

Thick forests, catchment of Manalsu Khad, highlands and sprawling glaciers beyond Galant thatch and more, collectively form the Manali Wildlife Sanctuary. Other animals spotted in the area are the Black Bear, Leopard and Barking Deer. Besides the Monal Pheasant, the forests also have a healthy population of Khaleej Pheasants.

Extreme conditions, high altitudes and remoteness keep the area isolated for about six months, making it a naturally protected region for rare flora and fauna to exist without human intrusions. Herbs found in the sanctuary find use in traditional medicinal systems.

In this playfield survives the Snow Leopard, Ibex, Blue Sheep and birds like Himalayan Snowcock and Golden Eagle. Other animals and birds found in this sanctuary are Tibetan Wolf, Red Fox, Woolly Hare, Himalayan Chough, Himalayan Finches and the Snow Pigeon. Being a good habitation for Snow Leopards, the upper reaches of Kibber sanctuary are a wildlife photographers haven. However, capturing the ‘ghost cat’ on camera is not an easy task; its camouflage and cautious nature make it difficult to spot and locate even at a distance of few meters.

Kibber one of the highest villages of Spiti is on the periphery of the sanctuary. This village is well connected to Kaza – the sub-divisional headquarters of Spiti Valley and can be easily reached.
The sanctuary also offers magnificent views of snow-clad peaks of Chau Chau Kang Nilda in the backdrop and sweeping sandy basins of Spiti River flowing in the valley.

him_admin2019-04-29T16:09:13+00:00
What's New Safety Guidelines for Tourists visiting Himachal Pradesh Shimla – Chandigarh – Shimla: Helitaxi Booking Do not stand at the edge of a cliff or on any bolder near a river bank for photographs etc. The water current in rivers of Himachal Pradesh is very strong and highly deceptive.